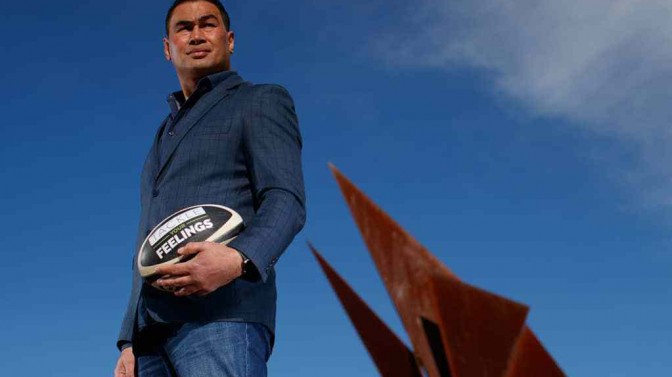 PAT LAM: “WE BROUGHT A COMMUNITY TOGETHER.”

PAT LAM: “WE BROUGHT A COMMUNITY TOGETHER.”

WHEN RUGBY PLAYERS Ireland asked Pat Lam to get involved in the Tackle your Feelings campaign, the Connacht head coach didn’t have to think about it for long before throwing himself into it.

He had watched Ireland international Jack McGrath opening up about his brother’s suicide and Connacht’s Jake Heenan detailing tough times in his youth when he was arrested and became homeless.

Having taken a keen interest in psychology throughout his playing and coaching career, Lam knows better than most the value of connecting with others and being self-aware.

He appreciates how the smallest acts of kindness and encouragement can make a huge difference to people’s lives.

“Sport mirrors life,” says Lam, who will leave Connacht for Bristol this summer. “When things are going well it’s great, but when it’s tough you want to be able to go back to your mates.

“There’s nothing better than when you have friends who can help you when you’re not feeling great, people to talk to. That’s why I put a massive emphasis on connecting as a team, connecting with our community, and understanding who we play for.

“The other concern while I’ve been here – I’ve got my kids here in Ireland obviously – I was really taken aback, and I know it’s a worldwide problem, but suicide was massive. It has affected everyone.

“Even my kids have had friends who have taken their lives or know people whose friends have. We’re all affected by it one way or another.”

A major part of Lam’s philosophy in Connacht has been around ensuring that players and coaches and backroom staff genuinely bond with each other.

The famous five-county handshake is part of that, the demand on Connacht’s squad to greet each other every single morning. Lam feels that habits like these have helped to ensure Connacht’s players always feel connected.

“I’ve been lucky enough not to suffer from mental health problems but one of the reasons why, when I look back, is because I’ve got good friends, people that love me and believe in me,” says Lam.

“Like everyone, I’ve had tough times but it’s always those people that have helped me get through. If we can share that story, that’s good.

“All the stuff we’ve done here in Connacht with the handshakes and all the stuff that’s been publicised, it’s all about getting to know each other.

“Some people say it sounds exhausting, but I’ve seen it so many times – a player sits at breakfast and 15 or 20 guys come in and don’t say anything to that player. That player might be tired or not feeling great.

“I’ve seen the benefit of exactly the opposite, where every single one of those 20 guys says, ‘Morning, how are you?’ I’ve watched that same guy sitting there completely change because he’s been acknowledged.

“It’s a little thing but it’s powerful. If you break that down into people who are lonely and going through tough times, it has so much relevance.”

While Lam’s video for Tackle your Feelings talks about the power of just one encouraging word, he also mentions the importance of self-awareness in this area.

Again, this is part of his rugby philosophy, but Lam feels that it extends into all aspects of life.

“I always tell the players that their greatest tool is self-awareness,” says Lam. “I can tell a player that he hasn’t done something well or he needs to work on something because it’s not going very well, but it makes no difference if they don’t understand it and become aware of it themselves.

“The moment they’re aware of it by asking questions and taking notice, they can take ownership of it and you can help them to build it and improve. It’s exactly the same when it comes to mental health, your feelings and emotions.

“If you’re able to be aware that it’s ok not to be ok and there’s people there that can help you.

“At the preventative and proactive side of it, if you’re doing a daily check and connecting with people, it will help you get through a lot of tricky situations in life.”

Lam has always been fascinated by the power of the mind and the possibilities created when people feel connected within a group.

His playing career with Auckland, Northampton and Newcastle exposed him to being a leader for the first time, while his subsequent coaching journey with Auckland, the Blues and Connacht has seen his philosophy around these areas develop.

During his time coaching in New Zealand, Lam asked the union that his continuous personal development [CPD] opportunities would be focused in the field of sports psychology, meaning regular trips to the US to learn from the best in the field.

Early exposure to Carol Dweck and the concept of growth mindset was influential on Lam, while other speakers helped him to understand that the tactical, technical and physical elements of rugby need to be built on top of a greater foundation.

“You have your experiences with successful and not-so-successful teams and you’re always thinking, ‘How did we do that?’ or ‘Why are we so bad?’” says Lam.

“Everyone in rugby is talented and everyone can work hard on the physical side of it, but when you’re dealing with team sport and there’s more than you involved in it, you’re reliant on being able to connect.”

A conference led by Sir John Whitmore was important in Lam’s understanding of the power of self-awareness and he still uses those lessons in his daily coaching.

“I do my one-on-ones with players using that technique around trying to raise their self-awareness,” explains Lam. “I ask, ‘What are your goals? What do you want to achieve? Where do you see yourself against the best player in the world?’

“I could tell them the answers from my perspective but when you raise that with them, it’s amazing the changes you see.”

It was a long journey from Lam’s arrival as head coach in 2013 and they leaned heavily on the work of others like Eric Elwood in the past, but this season has seen a dip from Connacht that now leaves them in a battle to quality for next season’s Champions Cup.

Connacht are currently eighth in the Pro12 ahead of tonight’s clash with the Scarlets at the Sportsground [KO 7.35pm, TG4] and if they remain there at the end of the regular season, they will travel to England for their play-off semi-final.

A win in that tie would mean Connacht having home advantage in the play-off final, but whatever route his side have to take, Lam stresses that they must achieve qualification into the top-tier of European rugby.

“Champions Cup, without a doubt,” says Lam of how he needs to end his time with Connacht before leaving for Bristol this summer. “We could win these next two games and lose the play-off, finish in eight but that’s not great.

“The number one thing is we’ve got to get into the Champions Cup. We’re guaranteed a play-off spot so these two games are about preparing the squad to ensure that we arrive at that play-off with a group of players that are pumped, and ready to go to England or France, most likely England.

“Then hopefully we can get to the play-off final and if we can leave with Connacht in the Champions Cup next year, I’d be very happy.”

The pressure is on the westerners to earn that qualification before the arrival of new head coach Kieran Keane, and Lam admits there has been slight frustration that Connacht are not competing for a Pro12 semi-final at this point of the season.

Backing up the trophy success of last season was always going to be very tough but Lam says Connacht have been close to matching the performance levels.

“We’ve looked at every single game that we’ve lost and thought that we could have won. It’s frustrating in the sense of outcome, but I’m extremely positive around the fact that when we won the title – that’s not the destination, that’s just an outcome of the work we’ve done – but the journey has to continue for years and years and years to come.

“The team will never be the same and there are numerous reasons that we haven’t got the outcomes we’ve wanted this season. It’s all changing the mindset around the quality of the work we do every day.

“I look at the expectation and mindset here and it’s completely different. I look at the quality of the player coming through and it’s outstanding.”

That’s the key to Lam’s calmness as Connacht fans worry about not getting back into the Champions Cup – he believes that the province is in a better place than ever.

He has seen a total shift of attitude in Connacht, to the extent that finishing eighth in the Pro12 no longer feels acceptable.

While Lam has undoubtedly driven the western province forward, he says he will leave for Bristol having learned huge amounts in Connacht.

“The biggest thing I’m proud about is our mindset and our expectation, it’s completely different. I know there was the history and I’ve heard it so many times, it used to drive me crazy – ‘The IRFU tried to close them down, they don’t have this, they don’t have that.’

“My view was that that mindset was more of a hindrance, the old chip. Now it’s a case of us making our own expectations and that we’ll make the most of it.

“There’s always going to be someone who has more and the other three provinces might have more than we have, but Toulon and Montpellier have more than they have. You’re just wasting your time comparing.”

And Lam stresses again that the key to the success Connacht have achieved under him all comes back to the connections that have been built between players, coaches, staff, supporters and an entire province.

As he gets set for what may be his final game in charge of Connacht at the Sportsground this evening, Lam can take pride in being part of the journey.

“I’ll never forget after the Pro12 final when I went to Pearse Stadium to watch Galway play Roscommon,” says Lam.

“The Galway people were standing beside me on the terraces telling me how they got to Edinburgh and then on the other side I had the blue and gold of Roscommon telling me about all the ways they got over for it.

“Then they asked me which team I was backing, and I just said, ‘I want a Connacht team to win.’

“They all laughed but it made me realise that we had brought a community together to be proud of Connacht – not just rugby people but people from all those counties. I’m proud of that.”